Supercomputers are expensive to make no matter how you look at it. But if you use a whole bunch of PS3s, you can save over 10x the cost compared to this guy. The Condor project is a supercomputer made up of 1,716 PS3s for the Air Force’s image processing tasks and is considered one of the top forty fastest computers in the world. Its big task involves monitoring 15 square miles 24/7, but not in the way you think.

Because the PS3 is really good at image processing, the Air Force hopes it will solve their problem of processing images from all their recent aerial photo gathering. With all the satellites they have, it has become pretty easy to snap loads of photos, but figuring what parts are important is difficult.

What’s crazy about Condor is that users will be able to move cameras around like you’re playing Starcraft. “You can literally rewind or predict forward (in the future), based on the information you have,” said Mike Barnell, director of HPC at the Rome Research Lab.

Let’s hope that Condor is used for military analysis and not tuning in on our daily activities. Though it would be funny to point the satellites at the Bay Area, I don’t think anyone in the Air Force wants to know how boring my life is. 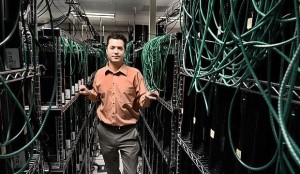