Before dialling an unfamiliar service number, many of us feel an overwhelming sense of dread. Not just for 0800 and 0808 “freephone” numbers, which are now free to call from a mobile, but numbers starting with 084, 087 and 09 too. From experience, you know what they represent: expensive call charges. Worse yet, it’s almost impossible to know how much you’ll be spending. When the latter are advertised on TV, you’ll usually hear something along the lines of: “Calls cost 50p from a BT landline. Other landlines may vary and calls from mobiles may cost considerably more.” It’s confusing because the costs vary wildly depending on your operator and the number you’re calling, and neither charge is explained properly in advance. Most of us just dial the number anyway and hope for the best, or try to avoid the call entirely. It’s a mess, but from today everything is going to change. Ofcom has introduced a new system that makes call charges simpler to figure out. How does it work? Calling what are known as “non-geographic numbers” can involve a lot of different companies. Under the new system though, there are only two parties you need to care about: the company you’re calling, and your phone operator. They each have a rate, called the “access charge” and the “service charge, ” which are combined for a final fee. The “access charge” is set by the company behind your landline or mobile SIM. The number should be easy to find: Ofcom says phone operators are required to publish them “in a way that is prominent and readily accessible to customers.” That means on their website, on your phone bills and on the paperwork you sign for a new contract. The figure stays the same for every premium rate call you make, so it shouldn’t be too difficult to memorise — even if your family uses a landline and multiple mobile networks. The second part is the “service charge” levied by the company you’re calling. Whenever you stumble across a service number, you should also find this rate — and again, it’ll stay the same regardless of whether you’re placing the call on a landline or mobile. So from now on, you can expect to see something like this: “Calls cost 50p per minute, plus your phone company’s access charge.” If your access charge is 25 pence per minute, for example, the total cost would be 75 pence per minute for the duration of the call. Why does this matter? The new system should make it much simpler to work out what premium-rate calls will cost in advance. The introduction of a clear “access charge” should also make it easier to compare phone operators. Although most of us call non-geographic numbers infrequently, it could be a contributing factor when choosing your next phone contract. Anything else I should know? Yes, actually. As we mentioned earlier, you’ll no longer be charged for calling 0800 and 0808 numbers from a mobile. So if you don’t own a home phone or need to place a call when you’re out and about, freephone numbers are finally just that — free. Filed under: Wireless Comments Source: UK Calling , Ofcom

Read More:
0800 numbers are now free to call from mobiles 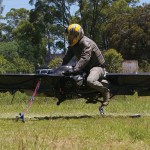 The US military is developing Star Wars-style hoverbikes