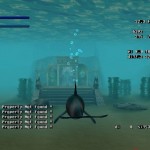 The Dreamcast Ecco sequel you never expected is now available as a prototype download. (credit: Hidden Palace ) You probably thought that Sega’s official abandonment of the Dreamcast back in 2001 meant we wouldn’t see any new, Sega-produced Ecco the Dolphin games for that system. If so, you thought wrong. That’s because a newly unearthed prototype of the Dreamcast’s cancelled Ecco II: Sentinels of the Universe has hit the Internet, more than 15 years after it was made. The prototype build, uploaded by the game preservationists at Hidden Palace , is dated February 19, 2001, less than a month after Sega announced it would stop supporting the Dreamcast and step away from the hardware business for good. It comes to the Internet via a large lot of Ecco Dreamcast assets acquired by Hidden Palace , and the site promises “more exciting (and long overdue) [ Ecco ] stuff in the weeks to follow.” In addition to the ripped GD-ROM version, which is fully playable on PC Dreamcast emulators, Hidden Palace also released a self-boot CDI image that can be burned to disc and played on actual Dreamcast hardware (and hopefully on a real CRT television, for that authentic 2001 console gaming experience). We can thank the Dreamcast’s extremely broken copy protection technology for that little wrinkle and for the widespread piracy that  helped doom and/or popularize the system back in its day. Read 4 remaining paragraphs | Comments