Divers discovered bottles in a shipwreck off the Finnish Aland archipelago in the Baltic Sea in 2010. After tasting the bottles on site, the divers realized they were likely drinking century-old champagne. Soon after, 168 unlabeled bottles were retrieved and were identified as champagnes from the Veuve Clicquot Ponsardin (VCP), Heidsieck, and Juglar (known as Jacquesson since 1832) champagne houses. A few of the recovered bottles had been lying horizontal in close-to-perfect slow aging conditions. Discovery of these wines, likely the oldest ever tasted, unleashed a flood of questions. When were these wines produced? What winemaking processes were in use at the time? Where was the wine going when the shipwreck occurred? An analytic approach A team of scientists gathered to search for the answers through the application of current analytical techniques, an approach called archaeochemistry. Using a combination of targeted and nontargeted modern chemical analytic approaches, the researchers aimed to uncover aspects of the winemaking practices. Read 14 remaining paragraphs | Comments 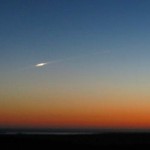 This Is What a 2,000-Pound Satellite Falling to Earth Looks Like