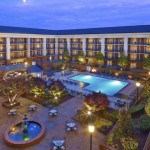 (credit: HEI Hotels & Resorts) The chain that owns Starwood, Marriott, Hyatt, and Intercontinental hotels—HEI Hotels & Resorts— said this weekend that the payment systems for 20 of its locations had been infected with malware that may have been able to steal tens of thousands of credit card numbers and corresponding customer names, expiration dates, and verification codes. HEI claims that it did not lose control of any customer PINs, as they are not collected by the company’s systems. Still, HEI noted on its website that it doesn’t store credit card details either. “We believe that the malware may have accessed payment card information in real-time as it was being inputted into our systems,” the company said. The breach appears to have hit 20 HEI Hotels, and in most cases, the malware appears to have been active from December 2, 2015 to June 21, 2016. In a few cases, hotels may have been affected as early as March 1, 2015. According to a statement on HEI’s website, the malware affected point-of-sale (POS) terminals at the affected properties, but online booking and other online transactions were not affected. Read 4 remaining paragraphs | Comments

Scientists Finally Observed Time Crystals—But What the Hell Are They?

A 50 Gbps Connection With Multipath TCP