schwit1 writes A 20-year-old U.S. military weather satellite apparently exploded for no obvious reason. The incident has put several dozen pieces of space junk into orbit. From the article: “A 20-year-old military weather satellite apparently exploded in orbit Feb. 3 following what the U.S. Air Force described as a sudden temperature spike. The “catastrophic event” produced 43 pieces of space debris, according to Air Force Space Command, which disclosed the loss of the satellite Feb. 27 in response to questions from SpaceNews. The satellite, Defense Meteorological Satellite Program Flight 13, was the oldest continuously operational satellite in the DMSP weather constellation.” Read more of this story at Slashdot. 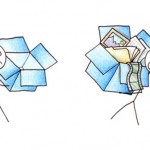