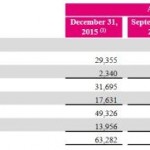 T-Mobile added another 8.3 million customers in 2015