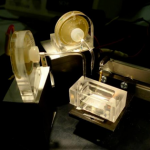 University of Oxford chemists custom-built a 3D printer that fabricates “synthetic tissue,” or rather structures with tissue-like functions. Eventually, the technology could be used to crank out replacement tissue that could replace damaged human tissue or be used in new drug delivery systems. The material consist of a network of water droplets encapsulated in lipids, or fat molecules. “The droplets… form pathways through the network that mimic nerves and are able to transmit electrical signals from one side of a network to the other,” says Oxford University chemistry professor Hagan Bayley. Amazingly, the material can be chemically “programmed” to fold into various shapes as water is transferred around in the network. (Video above.) ” 3D printer can build synthetic tissues ” (Univ of Oxford, via Science News ) ” A Tissue-like Printed Material ” (Science) 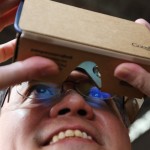