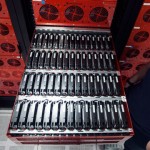 That’s a lot of hard disks. (credit: Backblaze) For the last few years, we’ve looked at the hard disk reliability numbers from cloud backup and storage company Backblaze, but we’ve not looked at the systems it builds to hold its tens of thousands of hard disks. In common with some other cloud companies, Backblaze publishes the specs and designs of its Storage Pods, 4U systems packed with hard disks, and today it announced its sixth generation design , which bumps up the number of disks (from 45 to 60) while driving costs down even further. The first design, in 2009, packed 45 1.5TB disks into a 4U rackable box for a cost of about 12¢ per gigabyte. In the different iterations that have followed, Backblaze has used a number of different internal designs—sometimes using port multipliers to get all the SATA ports necessary, other times using PCIe cards packed with SATA controllers—but it has stuck with the same 45 disk-per-box formula. The new system marks the first break from that setup. It uses the same Ivy Bridge Xeon processor and 32GB RAM of the version 5, adding extra controllers and port multipliers to handle another 15 disks for 60 in total. The result is a little long—it overhangs the back of the rack by about four inches—but it’s packed full of storage. Read 2 remaining paragraphs | Comments

Cyanogen Grabs Another $80 Million In Funding