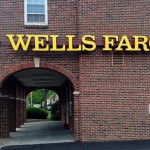 (credit: Mike Mozart ) Since at least 2011, Wells Fargo employees have been creating fake accounts using customers’ identities to boost their sales numbers, federal regulators said on Thursday. The Consumer Financial Protection Bureau (CFPB) fined the bank $100 million after a third-party consulting firm found that 2 million fake deposit and credit card accounts had been made without the consent of the person whose name was on the account. According to CNN Money, the bank fired 5,300 employees for taking part in the scheme, which constitutes about 1 percent of the bank’s payroll. In order to boost their sales numbers, employees opened 1.5 million deposit accounts and 565,000 credit card accounts on customers’ behalf but without authorization from those customers. “Employees then transferred funds from consumers’ authorized accounts to temporarily fund the new, unauthorized accounts,” the CFPB wrote. “This widespread practice gave the employees credit for opening the new accounts, allowing them to earn additional compensation and to meet the bank’s sales goals.” Read 7 remaining paragraphs | Comments