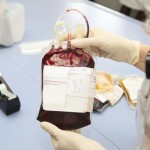 This stock image is just for illustration, you do not need this much blood to take the new test. Every disease that you’ve ever encountered is cataloged within your DNA, and now a team from the Howard Hughes Medical Institute has worked out how to access that data. It’s part of a project called VirScan that, it’s hoped, will revolutionize medical testing and help Doctors catch illnesses long before they manifest. Even better, is that it’s not even an expensive procedure, with each test slated to cost just $25 — well, at least before your hospital slaps on their own fee on top. The project has been led by Stephen Elledge, who says that Doctors normally treat viral infestions with a trial-and-error system of testing based on symptoms. By comparison, VirScan can just examine every nasty thing your body has come into contact with and center in on what’s causing the trouble. The technique could become critical in finding and solving conditions with a very long incubation time, like HIV and hepatitis C. As part of the research, the team also discovered that most people’s bodies deal with infections in a similar way, and that the system could help develop vaccines for previously un-treated conditions. Elledge also believes that the technology is going to help researchers investigate if there’s a link between viral infections and non-viral conditions like diabetes and multiple sclerosis. The good news doesn’t stop there, either, since it could also make medical research across borders significantly easier. With a VirScan device, scientists could easily compare and contrast the infection rates for various diseases across the globe. [Image Credit: Getty] Filed under: Science Comments Via: Washington Post Source: HHMI , Science

Originally posted here:
A drop of blood reveals every disease you’ve ever had