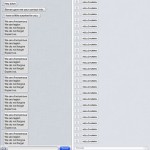 Human can’t be blamed for thinking this show of affection comes off as a little clingy. Adam Bell/The Next Web On Friday, The Next Web reported that a group of iOS developers were experiencing rapid-fire texts over iMessage, causing bothersome and repetitious messages and notifications. While the prank wasn’t serious on the level of, say, a full-scale DDoS of a bank website , and concern over spam via iMessage is not new either, the unwanted messages were fresh proof of some problems with the iMessage app, specifically in the lack of good spam-detection in iMessage, and in the lack of a way for users to block a message sender. One of the recipients of the spam, an iOS jailbreak tool and app developer who goes by the moniker iH8sn0w , informed The Next Web of the prank when it happened. iH8sn0w told Ars over Twitter that he simply disabled the handle that was getting flooded. “It’s just a bunch of kids bored playing with AppleScript,” he said. Another app and extension developer for iOS devices, Grant Paul, reported on Twitter that he was getting spammed on iMessage with very large messages, causing his iMessage app to crash. “The iMessage spammer has now completely locked me out of my iOS Messages app, by sending long strings of Unicode chars. Definitely a DoS,” Paul wrote on his Twitter account . Ars reached out to Paul but has not yet heard back from him. Read 3 remaining paragraphs | Comments

Visit site:
A flood of prank iMessage texts shows the app can be crashed easily

Apple unveils the next version of OS X, “El Capitan”