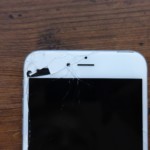 If you’ve ever had to deal with a cracked smartphone screen, you know what a hassle it can be. Slapping a screen protector on it is only a stopgap until you have to have the screen replaced , which comes with a decent price tag. Now, researchers in Tokyo have discovered a new polymer that may actually heal itself, potentially leading the way to a future of self-healing phone screens. The study was published in Science by a team of researchers led by Professor Takuzo Aida from the University of Tokyo. Titled “Mechanically robust, readily repairable polymers via tailored noncovalent cross-linking, ” the research promises a unique hard glass-like polymer called “polyether-thioureas” that can heal itself with only hand pressure. This makes it different than other materials that need high heat to heal up from a break. “High mechanical robustness and healing ability tend to be mutually exclusive, ” said researchers. “In most cases, heating to high temperatures, on the order of 120 degrees Celsius or more, to reorganize their cross-linked networks is necessary for the fractured portions to repair.” According to The Guardian , the special glass polymer was discovered by mistake by a graduate student, Yu Yanagisawa, who thought the material would become a type of glue. He found that cut edges of the polymer would stick to each other, and formed a strong sheet after being compressed by hand at 21 degrees Celsius. This isn’t the first time we’ve seen self-repairing phone tech, of course, with screen protectors that heal themselves and a Motorola patent for a self-repairing screen. However, new breakthroughs like this may help make broken screens and costly repairs a thing of the past. Via: The Guardian Source: Science

See original article:
A new polymer could make phone screen repairs a thing of the past