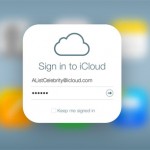 Hacking your iCloud files just got easier, even with two-step enabled