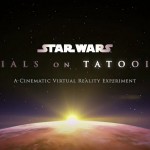 Last year Industrial Light & Magic teased an HTC Vive VR tie-in experience (the old teaser clip is embedded after the break) to go along with The Force Awakens and to celebrate the launch of its ILM Experience Lab . It appears its release was delayed along with the headset, but now that it’s rolling out, we should see it soon. Earlier this evening a short YouTube teaser for Star Wars: Trials on Tattooine appeared on the ILMVisualFX YouTube channel before going private, and it showed something that appeared to go beyond the Jakku Spy experience that appeared last year for Google Cardboard. It flashed a glimpse at the Vive headset, along with a VR trip in the Star Wars universe featuring everything from R2-D2 to player-controlled lightsaber battles. These screenshots should give you an idea of what this Cinematic Virtual Reality Experiment will be like, now we’re just waiting to hear when it will be available. [Thanks, Anonymous!] Source: ILMVisualFX (YouTube) 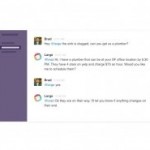 Service bot is an on-demand PA for offices