The iLIDmk1 is the first Kickstarter (and, as of this weekend, Kickstarted) project by a Darren Inglis and Simon Dunn-Vaughan, a couple of Aussies who were looking to reduce their “everyday carry“—despite the fact that their product is, indeed, yet another iPhone case, which would ostensibly add to the contents of your pockets (à la George Costanza). 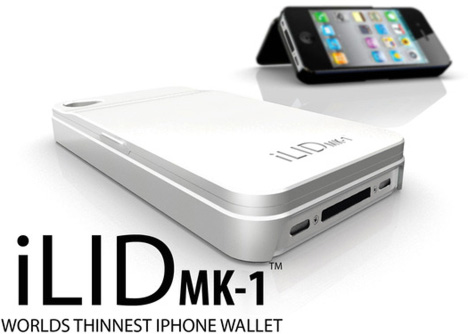 The twist? The iLIDmk1 allows an otherwise overburdened fellow to shed the weight of his wallet: it’s a hybrid iPhone case and wallet, which holds a couple pieces of plastic, some folded slips cotton and a small piece of metal—a.k.a. credit cards, cash and a key. In the interest of forgoing leather trifolds and keyrings, Darren and Simon have devised a polycarbonate iPhone case with a hinged compartment, measuring in at a mere 17mm thick and 30g.

Designed for a payload of two cards, key, cash and the ability to serve as a kickstand. The iLID-mk1 met with international interest after being featured in Macworld on the strength of rapid prototypes.

Bearing the MK-1 embossed on the front as a nod to the Apollo missions and aerospace pioneers such as Chuck Yeager.

Still, I’m sure there are some people who have reservations about a sort of 2-in-1 solution for all of their valuables… any thoughts?

Read the original:
A Step Towards Mobile Payment & Keycard for the iPhone, Sort Of