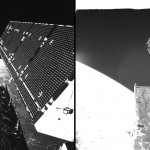 The European Space Agency’s Copernicus Sentinel-1A satellite has new 40cm dent on one of its solar wings — and it was caused by a tiny millimetre-size piece of space debris. The impact was discovered with the Sentinal-1A reported a slight power reduction last month. Onboard cameras quickly found the micrometeoroid impact, pictured above. Don’t worry, the ESA says the satellite is fine, but the impact serves as a reminder: at orbital velocity, tiny objects can cause major damage. This is a problem for the Breakthrough Starshot project , which aims to launch a laser powered nanocraft that travels at 1/5th the speed of light. That project hopes to reach the next solar system over in about 20 years. “Erosion of solid surfaces will be a severe problem at these speeds, ” says Ian Crawford of Birkbeck, University of London. “It’s possible that the wafersats won’t even be able to complete the journey.” For engineers, this isn’t news — NASA and other space agencies have been combating space derbies for decades — but it does mean that teams need to think of new ways to protect fast moving crafts. The faster a craft goes, the more dangerous tiny objects can be. At the speed Breakthrough Starshot is designed to reach, even microscopic space dust could be dangerous. Source: New Scientist , ESA

Taken from:
A tiny space pebble just put a huge dent in an ESA satellite

Players Help Power the Lights on This Soccer Field Just by...

A 50 Gbps Connection With Multipath TCP