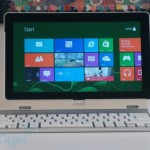 Until PC makers figure out what consumers want in their Windows 8 PCs, they’ll be throwing different designs at the proverbial wall to see what sticks. One thing’s for sure, though: laptop / tablet hybrids have already made it. So far, we’ve seen a mix of models, some with low-power Atom processors, and others with laptop-grade Core i5 CPUs inside. Basically, a choice between amazing horsepower and long battery life. In Acer’s lineup, specifically, we’ve already had a chance to play with the Iconia W510 , an Atom-powered device with a keyboard dock. Now we’re taking a look at the Iconia W700 ($800 and up), an 11-inch tablet that’s essentially an Ultrabook with no keyboard attached. Based on that brief summary you’d think it had the same form factor as the smaller W510, but you’d be wrong. Whereas the W510 has a keyboard dock with a built-in battery, the W700 has a cradle with a modular kickstand you can use you to prop up the tablet in landscape or portrait mode. There’s no battery inside the dock, and the keyboard is a standalone product; you’ll have to pack it separately if you decide you need it on a trip. So is there any advantage to having a design with so many different pieces? And how does that Core i5 processor fare, anyway? Let’s see. Gallery: Acer Iconia W700 review Continue reading Acer Iconia W700 review: a Core i5 Windows 8 slate that doesn’t skimp on battery life Filed under: Laptops , Tablets , Acer Comments

‘Vidity’ 4K movies you can download are coming later this year