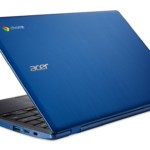 Acer has been releasing Chromebooks balancing speed with affordability. The company introduced its latest Chromebook 11 at CES as a fanless, small-form laptop with touch and non-touch screens that boasts up 10 hours of battery life. While Acer didn’t release exact specs for the models — we only know they’ll sport the ‘latest Intel Celeron processors, ‘ for example — but did note they’ll come with 4GB of memory and either 16GB or 32GB of eMMC storage. The laptops will have a pair of USB 3.1 Type-C and two USB 3.0 ports as well as a MicroSD card reader. Its 11.6-inch IPS 1366 x 768 pixel display comes in either touch or non-touch variants, though it’s unclear how much the difference will affect the price (previous Acer Chromebooks saw a $50 bump for a touchscreen). It will also have support for the Google Play store and get access to Android apps. We do know that those lower-performance options have dropped the Chromebook 11’s starting price to $250, which is slightly cheaper than the rugged Chromebook C771 that Acer introduced for students last August. But it does have double the RAM of the most recent Chromebook 15 that the company released in October, making it much more capable of multitasking through Google’s Chrome app suite. If you’re looking for an affordable solution with a decent battery life, Acer’s Chromebook 11 will hit Europe, the Middle East and Africa in March and reach North America in April. Click here to catch up on the latest news from CES 2018.