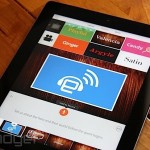 Whether you’re doing a book report or trying to show someone how to boil an egg: video can make it a heck of a lot easier for you to get your point across. Adobe’s new iPad app, Voice, hopes to make the often time-consuming experience of creating your own such videos a lot faster and easier. The app guides you through making a sharable vid, from the conception of your idea to the finished product. We’ve had a chance to try it out for the past week. We found that the app makes it easy to create some pretty professional looking stuff without having any special skills or a lot of time, but there’s just one thing missing. To kick things off with Voice, you’ll need to pick a topic and a story type. Once you do, the app will launch a project for your video — complete with instructional cards that give you an idea of how to tell your tale. The app is broken into several types of stories, which you may not realize are formulaic, but they are. For instance, a “Hero’s Journey” will start with a Setup Card, followed by a Call to Adventure, Challenge, Climax and finally, a Resolution. Each card provides a bit of detail on what you should be saying (and showing) on each card. It seems a bit elementary at first, but it’s surprising how that little bit of direction can help you stay on track and create a video someone is actually going to be able to follow and want to watch. Simple is the name of the game with Voice. The app’s instructions are really easy to follow, as is adding desired elements to your story. Tapping on a card opens it up for editing. For each part of your story you can add a still photo, text or an icon from the app’s built-in library. Voice doesn’t support video elements (yet), which keeps things simple, but is a huge downer for someone who wants to include, you know, some actual moving pictures in their project. That said, the built-in photos and the icons are really great looking — we considered them an asset rather than something we had to settle for. All of the (over 100, 000!) images you can access from within the app are available under a Creative Commons license, so you’re free to add them as you please. Even better, Adobe keeps track of everything you use, and includes proper attribution in the credits at the end of your video. Rather than recording audio for the full video at once, Voice does it one card at at a time. Once you’re done, Adobe enhances your voiceover to make it sound like it was recorded in a studio rather than on your iPad. It also adds a soundtrack to your monologue from its library. Track options are organized by the type of emotion they’re intended to evoke — i.e. playful, relaxed — and are mixed in like the score to a good movie, so you barely notice them. Each video also gets the benefit of one of 32 different themes. Built by graphic artists, the themes take a page from Adobe’s professional motion graphics program After Effects , and handle things like timing and transitions for your vid. The end result is a polished, professional-looking job (seriously) suitable for your business, or just making all the others kids in class look like rank amateurs. Filed under: Cellphones , Wireless , Mobile Comments