New submitter samleecole shares a report from Motherboard: There’s a video of Gal Gadot having sex with her stepbrother on the internet. But it’s not really Gadot’s body, and it’s barely her own face. It’s an approximation, face-swapped to look like she’s performing in an existing incest-themed porn video. The video was created with a machine learning algorithm, using easily accessible materials and open-source code that anyone with a working knowledge of deep learning algorithms could put together. It’s not going to fool anyone who looks closely. Sometimes the face doesn’t track correctly and there’s an uncanny valley effect at play, but at a glance it seems believable. It’s especially striking considering that it’s allegedly the work of one person — a Redditor who goes by the name ‘deepfakes’ — not a big special effects studio that can digitally recreate a young Princess Leia in Rouge One using CGI. Instead, deepfakes uses open-source machine learning tools like TensorFlow, which Google makes freely available to researchers, graduate students, and anyone with an interest in machine learning. Anyone could do it, and that should make everyone nervous. Read more of this story at Slashdot. 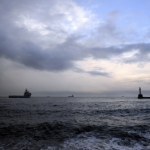