ugen shares a report from CNBC: Artificial Intelligence (AI) can now accurately identify a person’s sexual orientation by analyzing photos of their face, according to new research. The Stanford University study, which is set to be published in the Journal of Personality and Social Psychology and was first reported in The Economist, found that machines had a far superior “gaydar” when compared to humans. Slashdot reader randomlygeneratename adds: Researchers built classifiers trained on photos from dating websites to predict the sexual orientation of users. The best classifier used logistic regression over features extracted from a VGG-Face conv-net. The latter was done to prevent overfitting to background, non-facial information. Classical facial feature extraction also worked with a slight drop in accuracy. From multiple photos, they achieved an accuracy of 91% for men and 83% for women (and 81% / 71% for a single photo). Humans were only able to get 61% and 54%, respectively. One caveat is the paper mentions it only used Caucasian faces. The paper went on to discuss how this capability can be an invasion of privacy, and conjectured that other types of personal information might be detectable from photos. The source paper can be found here. Read more of this story at Slashdot. 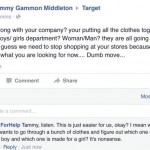 Facebook user gets away with nearly a full day of trolling...