Reuters and other news outlets carry the news that the Minnesota’s gigantic Mall of America is under heightened security after a video threat posted online by terrorist group Al-Shabaab. Also at CNN and CBS News. According to Reuters’ version of the story: The U.S. homeland security chief said on Sunday he takes seriously a threat made by Somali-based Islamist militants against shopping malls, including the Mall of America in Minnesota, and urged people going there to be careful. Homeland Security Secretary Jeh Johnson was reacting to a video released by al Shabaab appearing to call for attacks on Western shopping areas, specifically mentioning Mall of America, the West Edmonton Mall in Canada and London’s Oxford Street. … Mall officials issued a statement about the threat made by the group, saying they are monitoring events with the help of federal, state and local law enforcement agencies. “Mall of America has implemented extra security precautions, some may be noticeable to guests, and others won’t be, ” the officials said. Read more of this story at Slashdot.

First Few Doctor Who Episodes May Fall To Public Domain Next... 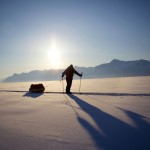 Walking To The South Pole (And Returning Alive)