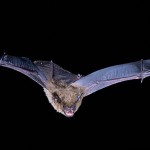 Even with fancy Hi-Fi equipment, the weak link is often our ears and their limited 20Hz-20, 000Hz hearing range. As pointed out by Motherboard , artist Jane Winderen wants you to get a feeling for what it’s like to be a whale or bat with her new album, “Out of Range.” To do that, she used special equipment to record bat echolocation signals, marine vocalizing and other sub- and ultrasonic sounds from glaciers , oceans , and forests. From there, she slowed frequencies as high as 100KHz until they became audible, then mixed them with other exotic sounds that are within our hearing range. The end result (below) is hypnotic 40 minute recording of sounds that normally pass you right by. Filed under: Science Comments Via: Motherboard Source: Jane Winderen

More here:
Album of inaudible animal sounds puts you inside the head of a bat

Scientists Insert a Synthetic Memory Into the Brain of a Sleeping...