Hugh Pickens writes “Ariel Schwartz reports that researchers are working on an alcoholism vaccine that makes alcohol intolerable to anyone who drinks it. The vaccine builds on what happens naturally in certain people — about 20% of the Japanese, Chinese, and Korean population — with an alcohol intolerance mutation. Normally, the liver breaks down alcohol into an enzyme that’s transformed into the compound acetaldehyde (responsible for that nasty hangover feeling), which in turn is degraded into another enzyme. The acetaldehyde doesn’t usually have time to build up before it’s broken down. But people with the alcohol intolerance mutation lack the ability to produce that second enzyme; acetaldehyde accumulates, and they feel terrible. Dr. Juan Asenjo and his colleagues have come up with a way to stop the synthesis of that second enzyme via a vaccine, mimicking the mutation that sometimes happens naturally. ‘People have this mutation all over the world. It’s like how some people can’t drink milk,’ says Asenjo. Addressing the physiological part of alcohol addiction is just one piece of the battle. Addictive tendencies could very well manifest in other ways; instead of alcohol, perhaps former addicts will move on to cigarettes. Asenjo admits as much: ‘Addiction is a psychological disease, a social disease. Obviously this is only the biological part of it.'” Read more of this story at Slashdot.

It’s Completely Absurd That the Police Still Use Typewriters 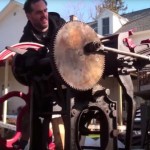