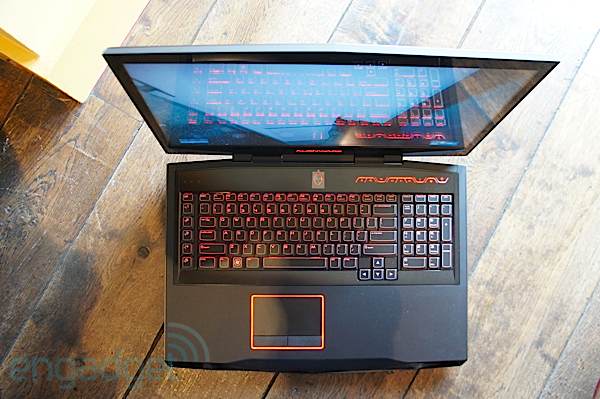 Sure, they may look the same, but Alienware’s decided to give what’s going on inside its glowing gaming laptops a thorough refresh. Starting with graphics support, the 2012 update of the M14x, M17x and M18x will all be able to handle NVIDIA’s 600 series graphics with GDRR5 memory, bolstered by support for the new PCI Express 3.0 — which Alienware reckons will give double the bandwidth seen on version 2.0. Memory has been given a kick with 1600MHz dual channel memory now the base standard on all three customizable machines, starting at 6GB, up from 4GB in the older models. Capacity for the smaller M14x is locked down at 16GB of RAM, while the large M17x and M18x will be able to utilize up to 32GB. Additionally, these freshened-up models will pack Intel Core i7 processors — but it’s the Sandy Bridge kind. While an Ivy Bridge version is logically the next step, it looks like we’ll have to wait for Intel to let its new hardware out to play before we see it in these gaming laptops.

On the storage side, Alienware’s keen to trumpet new support for mSATA technology, with the new storage medium capable of acting as either a boot drive to optimize Windows or as a caching drive for improved gaming performance — we reckon the latter sounds like more fun. In fact, with the options of standard SSD, mSATA and more pedestrian storage drives, there’s up to 23 different HDD options on the M18x alone. Customization-wise, the M14x also gets the new option of a built-in Blu-ray drive. Audio hasn’t been ignored either, with Creative’s new Sound Blaster Recon3Di High-Definition hardware folded into each of the laptops, with the same built-in speakers that got the Klipsch seal of approval last time around. Overall, it looks like there should be plenty to chew over in benchmark comparisons between the 2012 update and the models it replaces. Still, we can’t shake the feeling that Alienware must be at least planning to upgrade its laptops elsewhere — perhaps its worth waiting a little bit longer.