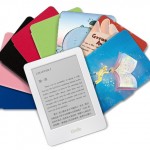 Have you missed white Kindle e-readers ever since they disappeared in 2012? So has Amazon. The internet retailer has quietly unveiled a white version of its basic Kindle reader that’s headed to at least China on April 8th, and Japan on April 20th. It’s virtually identical to the $79 black model, including the 800 x 600 e-paper touchscreen, WiFi and 4GB of storage — you’re really just getting a cosmetic change here. Still, it’s hard not to be curious about Amazon’s sudden nostalgia kick. We’ve reached out to Amazon to find out if and when the white Kindle will reach other parts of the globe, and we’ll let you know if there are any additional launches in the cards. Filed under: Amazon Comments Via: Ink, Bits & Pixels Source: Amazon.cn , Amazon.co.jp