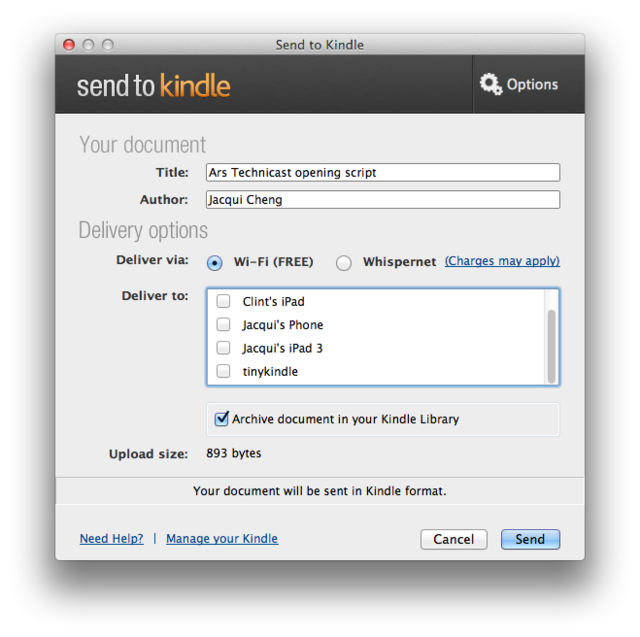 More than three months after releasing software for Windows-users to send documents to a Kindle, Amazon has now released the Mac version. Announced on Tuesday afternoon, the “Send to Kindle for Mac” application allows Mac users to wirelessly send personal documents to their Kindles via drag-and-drop in the Dock or within the app itself. Users can also send documents to the Kindle by printing from any Mac application.

As we wrote in January when the Windows version was released, each Kindle already comes with its own e-mail address so users can send files to themselves. (There’s also an Instapaper mechanism for sending documents to Kindle.) The desktop software aims to make that process easier, however, by eliminating the need to involve an e-mail client (especially convoluted in the case of printing from an app, which would involve printing to PDF and then sending that PDF to your Kindle). Users don’t have to be sending documents to a hardware Kindle either—files can be sent to a Kindle app on a mobile device, too (such as the iPad or an Android phone).

According to Amazon, users can also use the Mac software to archive documents in your Kindle library for download later if you don’t want those files to show up and take up space on your device right away. “Your last page read along with bookmarks, notes, and highlights are automatically synchronized for your documents (with the exception of PDFs) across your Kindle devices and Kindle apps for iPad, iPhone, iPod touch, and Android,” the company said in a statement.

Follow this link:
Amazon releases “Send to Kindle” desktop software for the Mac