Jeff Bezos runs Amazon and owns the Washington Post — is it any surprise that those two entities might start getting a little cozy? According to a new report from BusinessWeek , the a group of folks at the Post are working on a sort of curated Washington Post app that’ll be preloaded on the forthcoming Kindle Fire HD tablet . The kicker? It’s expected to be totally free to those Fire owners, and the app will eventually roll out to other Kindles, as well as iPads and Android tablets… though owners of the latter will have to shell out a subscription fee. This isn’t the first time that we’ve seen Kindles and traditional reporting collide — let’s not forget that Amazon once made a ginormous version of the Kindle meant in part to make newspapers more palatable on an e-ink screen — but it’s a big, smart step for a media company that has its metaphorical eyes set on a national audience. After all, just look at the numbers. Amazon has been historically cagey when it comes talking device sales, but if this preloading deal pans out, the Post’s readership could just explode. The folks in Seattle once said (years ago) that Kindle Fire sales accounted for 22% of all US tablet sales, and some back-of-the-napkin math suggests that Amazon moved just under 5 million Kindle Fires back then. There’s no denying the tablet landscape has grown and shifted since then but man, that’s still a solid chunk of new readers for a newspaper that has less than half a million daily readers. Our only question: when are other newspapers going to clamor for that same juicy access? Comments Source: BusinessWeek 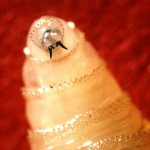 State of emergency declared as Florida struck by flesh-eating screwworms