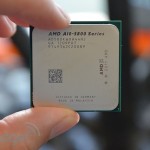 We can’t say AMD’s declining momentum was unexpected , but these results don’t necessarily have us excited about the future, nonetheless. For Q4, the company posted revenue of $1.16 billion, which is a 32-percent drop from the same period in 2011 , netting a loss of 63 cents per share. For 2012 as a whole, the company’s revenue rang in at $5.42 billion — a 17-percent fall from the previous year, and a $1.60 loss per share. President Rory Read references evolution and diversification when discussing outlook, but it’s clear that the company needs to make some major adjustments before it can return to profitability. Let’s hope that AMD’s 2013 lineup , including the Temash and Kabini APUs , help to turn this company around. You’ll find full Q4 and 2012 earnings in the PDF at the source link below. Filed under: Desktops , AMD Comments Via: The Next Web Source: AMD (PDF)