Brad Chacos: When the Radeon RX 560 launched in April it was the only RX 500-series card with a meaningful under-the-hood tech boost compared to the RX 400-series. The graphics processor in the older RX 460 cards packed 14 compute units and 896 stream processors; the upgraded Radeon RX 560 bumped that to 16 CUs and 1, 024 SPs. Now, some — but not all — of the Radeon RX 560s you’ll find online have specs that match the older 460 cards, and sometimes run at lower clock speeds to boot. AMD’s Radeon RX 560 page was also quietly altered to include the new configurations at some point, Heise.de discovered. The last snapshot of the page by the Internet Archive’s Wayback Machine occurred on July 7 and only lists the full-fat 16 CU version of the card, so the introduction of the nerfed 896 SP model likely occurred some time after that. Sifting through all of the available Radeon RX 560s on Newegg this morning reveals a fairly even split between the two configurations, all of which are being sold under the same RX 560 name. In a statement, AMD acknowledged the existence of 14 Compute Unit (896 stream processors) and 16 Compute Unit (1024 stream processor) versions of the Radeon RX 560. “We introduced the 14CU version this summer to provide AIBs and the market with more RX 500 series options. It’s come to our attention that on certain AIB and etail websites there’s no clear delineation between the two variants. We’re taking immediate steps to remedy this: we’re working with all AIB and channel partners to make sure the product descriptions and names clarify the CU count, so that gamers and consumers know exactly what they’re buying. We apologize for the confusion this may have caused.” Read more of this story at Slashdot. 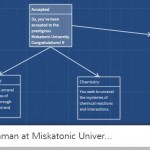 Twine Lets You Create "Choose Your Own Adventure" Stories with Ease