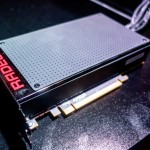 25 more images in gallery There’s not one, not two, but three brand new high-end graphics cards on the way from AMD. As rumoured, AMD is dropping the numerical branding and is instead grouping its top cards under the “Fury” banner. All are based on its new Fiji chip, which is a tweaked version of the company’s long-standing GCN architecture, and—as expected—all will come equipped with 4GB of stacked, on-package high bandwidth memory (HBM). The flagship is the $649 R9 Fury X, which launches on June 24. At that price, it is pitched directly against Nvidia’s GTX 980 Ti . It features 4096 stream processors—a huge jump over the 2816 stream processors found in the R9 290X—”up to” 1050MHz core clock, 256 texture units, 64 ROPs, HBM memory with 512 GB/s of bandwidth, a 67.2 GP/s pixel fill rate, and a six-phase VRM (voltage regulator module), which AMD claims is ideal for overclocking the card. We don’t yet have UK pricing, but it’ll probably be around £550. Despite using two 8-pin power connectors, the Fury X’s power consumption isn’t as high as some feared: the TDP is 275W, just a tad higher than the R9 290X’s, although it’s worth bearing in mind that in real-world usage, the R9 290X was much closer to 300W. The Fury X supports up to 375W of power for overclocking. Read 7 remaining paragraphs | Comments