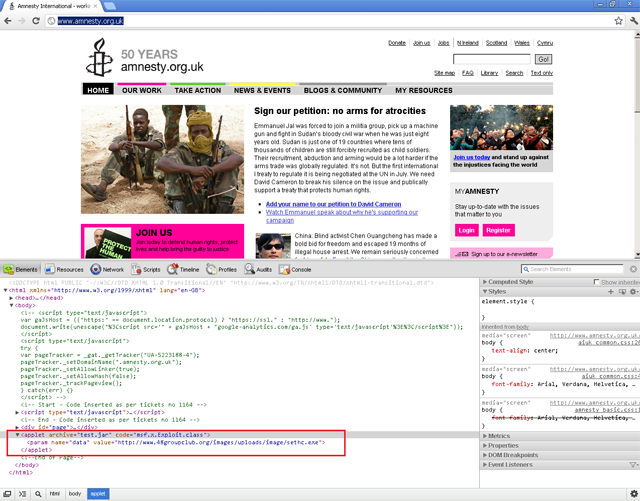 People visiting Amnesty.org.uk on Wednesday and Thursday were exposed to malicious code that exploited a now-patched vulnerability in Oracle’s Java software framework, according to a blog post published Friday by Websense. End users who hadn’t yet applied the patch were infected with Gh0stRat, a family of malware that siphons sensitive data from victims’ machines and can also operate Web cams and microphones in real time. The trojan came to light in 2009 when researchers reported that it infiltrated government and private offices in 103 countries. That included computers belonging to the Dalai Lama.

The Java vulnerability targeted on the Amnesty International site has been used in the past to install malware on computers running both Microsoft Windows and Apple’s OS X. Recently, similar espionage attacks have migrated to OS X, and the Flashback malware attack believed to have infected more than 500,000 Macs targeted the same bug. Based on the Websense post, however, it appears this week’s attacks infected only Windows users.