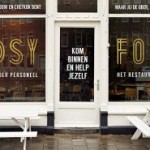 Add / Remove Pushing the idea of the ‘restaurant’ to its absolute limit, Foodsy is a new DIY Amsterdam eatery that does away with staff altogether. Instead, patrons cook, serve and even pay themselves using the food, equipment and instructions provided. Foodsy was created by chef Edwin Sander, and will open in a temporary location this week. Guests will be provided with a menu of recipe cards that they can use to cook for themselves easily in under 20 minutes — diners simply use the raw ingredients, or in some cases pre-prepared soups or stews. There are also instructions for how to tap a beer and the best setting to make their own coffee. Once they have eaten, guests simply pay for their meal using an iPad app. Because there is no staff, most of the meals are significantly cheaper than they would be elsewhere. Of course the unmanned restaurant experience is very unlikely to replace the pleasure of being waited on, but the concept could definitely thrive in busy areas where the trade of casual lunches are prevalent. We have already seen a pop-up restaurant that serves only food cooked by individuals in their homes. How else could eating out be adapted to suit different locations? Website: www.foodsy.amsterdam Contact: info@foodsy.amsterdam The post An unmanned restaurant where guests cook for themselves appeared first on Springwise .

Read the original post:
An unmanned restaurant where guests cook for themselves

Learn how Hollywood screwed over the VFX industry in Life After...