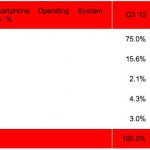 Now that we know what smartphone market share looked like in the third quarter when broken down by manufacturer , it’s time to compare performance by platform. As you’d imagine, the world is still Android’s oyster. Strategy Analytics estimates that the OS has crossed the symbolic 80 percent mark , reaching 81.3 percent of smartphone shipments by the end of September. Not that Google was the only company doing well — Nokia’s strong US sales helped Windows Phone grow to 4.1 percent of the market, or nearly double what it had a year ago. Whether or not these trends continue is another matter. Although Android likely isn’t in danger given the launches of phones like the Galaxy Note 3 , there are also new iPhones and Lumias on the scene; there may be one or two surprise upsets when the fourth quarter is over. Filed under: Cellphones , Mobile , Apple , Microsoft , Nokia , Google , Blackberry Comments Source: Strategy Analytics