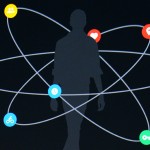 How many times have you checked your phone today? If Google’s data is correct, your answer is somewhere between zero and 125. This proclivity to check our phone is the foundation upon which Android Wear, the company’s wearables platform, is built. Wear isn’t about replacing your smartphone though; it’s about extending Android beyond your pocket and into the world around you. Yesterday’s I/O keynote revealed a lot about Google’s vision for the future — and Wear is the thread that could tie it all together. On stage, Director of Engineering for Android, David Singleton, explained that everything in Android L is contextually aware, and has voice recognition enabled. Wear isn’t a separate entity; it’s an extension of Android L. An interface that bridges your experience of the world to the phone in your pocket (and vice versa). No more unlocking your phone and digging for restaurant recommendations. Wear knows your location and preferences; it’s already giving you step-by-step directions to a ramen joint around the corner. Or so the theory goes. Wear isn’t a separate entity; it’s an extension of Android L. Singleton’s demonstration of how Wear dances with, rather than marches beside, your phone was to order a pizza through his watch in under 20 seconds. A party trick to please the mostly developer audience, sure, but that demo showed Wear’s potential in a way that people understand: a useful interaction that solves a (hunger) problem. That’s something you can easily do from your phone, of course; the smartwatch skeptics are going to be harder to impress. Singleton’s second onstage demo showed Wear working with a tablet, displaying a recipe from Allthecooks . The tablet is the main screen in this scenario, but Wear is listening; it’s a servant to more than one device. The tablet feeds Wear each stage of a recipe one by one. Swipe for the next instruction on the watch, and this is reflected back on the tablet. The same is true for all interactions on all apps across all your Android L devices. No more dismissing notifications twice. This same symbiosis will be present across Android, Wear and Chrome OS — Google’s making the most determined push for unity yet, and Wear is a big part of it. Great, we can order pizza and make recipes a little less likely to fail. But Google has a much broader ecosystem now. Android will be in cars , TVs and your home . It knows what you like to eat, where you go on weekends and how badly you suck at Tappy Chicken . All of this information is united by your phone, and (the idea being) effortlessly enhanced by Wear. The feel-good promo videos might ham it up a little, but Google Now’s cards are getting smarter , and could find a natural home on your wrist. Having a wearable that controls (and is controlled by) all the technology in your life is, perhaps, the only logical case for a smartwatch — and that’s what Google is going for. Google wants Wear to be the key that unlocks the Android experiences around you right now. Earlier on in the I/O keynote, Director of Engineering at Google, Dave Burke, showed off a new feature within Android L — trusted environments. If you have a “Bluetooth watch” (this was before Wear was discussed), your phone knows you’re near, and removes the need for a password to access it. This might work for all Bluetooth devices, but it’s further evidence of the neat shape Google has cut out for Wear in Android’s future. Google wants Wear to be the key that unlocks the Android experiences around you right now. If you’re thinking Wear is just a fancy example of the internet of things , that’s because it is. This isn’t even the first wrist-worn gadget to be used for controlling other smart devices. Jawbone and SmartThings may spring to mind. The difference here is potential scale. Having a fitness tracker feed into your home automation is great. A platform that can set your thermostat , get driving directions (or score a lift ), tell you about your surroundings and quickly reply to a friend’s message is better. Your phone is still the brain, the identifier, the hardware that knows you. Wear listens, interfaces, serves. Much like Android itself, or Google Now, Wear is a platform that, if grown with care and attention, could usher in the era of the smart-world. A world where technology is used to lower, not create barriers between discovery and social interaction. That’s the marketing dream at least, and surely one we’re all invested in. On a more practical level, if Google is working on a unified ecosystem (as it appears to be ), it’s about time for something like Android Wear. Filed under: Wearables , Software , Mobile , Google Comments

Control Any Circuit with a TV Remote and an Arduino