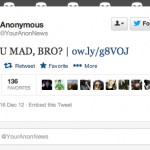 That link? It leads to a survey entitled, “Interactive Butthurt Report v. 2.0.” Nothing is beneath the Westboro Baptist Church, as evidenced by the group’s announcement to picket outside Sandy Hook Elementary School in wake of the recent tragedy. The group’s most recent, perhaps most deplorable decision has apparently irked one of its oldest enemies : infamous hacker collective Anonymous. In response to the WBC’s plans early today, Anonymous tweeted , “It’s so nice of #WBC to provide the internet with a list of their twitter handles…” Roughly one hour later, they revealed their plans for the WBC : “#WBC GodHatesFags Site Admin gets #DOX’d via: Anonymous.” DOX, of course, refers to the work Anonymous did to find and publish a list of WBC members complete with e-mails, phone numbers, and even home addresses—all for the adoring public to access. In addition to the DOXing, Anonymous has repeatedly promoted a whitehouse.org petition to have the WBC recognized legally as a hate-group . The petition was created on Friday and it has already doubled the required 25,000 signatures. Read 1 remaining paragraphs | Comments

Shelfie Lets You Download Ebooks and Audiobooks by Snapping Photos of...