The Anonymous hacking collective has petitioned the White House, using the US government’s open forum to ask for DDoS attacks to be registered as an official form of complaint – and requesting the convictions of previous DDoS attackers be wiped from their records. More » 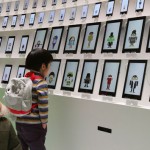