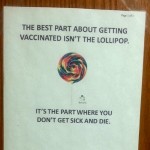 Anti-Vaxxers are responsible for the rise in two infectious diseases we’d nearly eliminated from the United States. Researchers at Emory and Johns Hopkins Universities have determined, through a National Institute of Health review , that the rise in measles is directly attributable to vaccine refusal, and that it is certainly helping whooping cough out as well. From the NIH study’s abstract: Findings We identified 18 published measles studies (9 annual summaries and 9 outbreak reports), which described 1416 measles cases (individual age range, 2 weeks-84 years; 178 cases younger than 12 months) and more than half (56.8%) had no history of measles vaccination. Of the 970 measles cases with detailed vaccination data, 574 cases were unvaccinated despite being vaccine eligible and 405 (70.6%) of these had nonmedical exemptions (eg, exemptions for religious or philosophical reasons, as opposed to medical contraindications; 41.8% of total). Among 32 reports of pertussis outbreaks, which included 10 609 individuals for whom vaccination status was reported (age range, 10 days-87 years), the 5 largest statewide epidemics had substantial proportions (range, 24%-45%) of unvaccinated or undervaccinated individuals. However, several pertussis outbreaks also occurred in highly vaccinated populations, indicating waning immunity. Nine reports (describing 12 outbreaks) provided detailed vaccination data on unimmunized cases; among 8 of these outbreaks from 59% through 93% of unvaccinated individuals were intentionally unvaccinated. Conclusions and Relevance A substantial proportion of the US measles cases in the era after elimination were intentionally unvaccinated. The phenomenon of vaccine refusal was associated with an increased risk for measles among people who refuse vaccines and among fully vaccinated individuals. Although pertussis resurgence has been attributed to waning immunity and other factors, vaccine refusal was still associated with an increased risk for pertussis in some populations. We all pay for anti-vaxx ignorance.