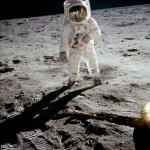 (credit: NASA ) Deep space travel takes a toll on the body—and it’s apparently something you can’t moon-walk off. Apollo astronauts who have ventured out of the protective magnetosphere of mother Earth appear to be dying of cardiovascular disease at a far higher rate than their counterparts—both those that have stayed grounded and those that only flew in the shielding embrace of low Earth orbit. Though the data is slim—based on only 77 astronauts total—researchers speculate that potent ionizing radiation in deep space may be to blame. That hypothesis was backed up in follow-up mouse studies which provided evidence that similar radiation exposure led to long-lasting damage to the rodents’ blood vessels. All of the data is published Thursday in the journal Scientific Reports . The study, while not definitive, may add an extra note of caution to the potential hazards of future attempts to fly to Mars and elsewhere in the cosmos. Read 9 remaining paragraphs | Comments