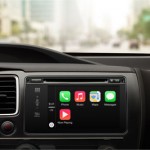 Apple has officially announced CarPlay , its new in-car interface that’ll be compatible with new Ferrari, Mercedes and Volvo cars unveiled at the Geneva Auto Show this week. Designed “from the ground up” to bridge the gap between your iPhone and your auto, it will offer touch and Siri-based voice navigation of your smartphone services, including contacts, voicemail, notifications, map directions and music cueing — it will even support third-party apps like Spotify and iHeartRadio from launch. Voice controls will be activated by a button on the steering wheel, while the in-car touchscreen is populated with those familiar iOS 7 icons for easy access. The service will launch as an iOS update for Lightning-enabled iPhones (that’s iPhone 5 and up), with CarPlay-compatible vehicles launching later this year. And if any of the above aren’t your preferred automaker, Apple says that you can expect compatible cars from BMW, Ford, General Motors, Honda, Hyundai, Toyota and several more in the near future. Update: At first CarPlay will only allow you to connect through a Lightning cable, but WiFi should be coming in the near future — at least from Volvo. And, in case you’re wondering, the CarPlay connection is based on the H.264 video protocol, and sends user input from the touchscreen back to your iDevice. There’s also a video demo/teaser that we’ve added after the break. Filed under: Cellphones , Transportation , Mobile , Apple Comments Source: Apple , CarPlay , Volvo

Mars 2020 rover will observe the red planet with 23 eyes

An Amazon Echo may be the key to solving a murder...