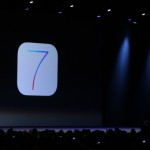 A new version of Apple’s mobile operating system, iOS 7, was announced at the company’s Worldwide Developer Conference (WWDC) at the Moscone Center in San Francisco. The release will feature, among a number of changes, a departure from the bubbly, skeuomorphic design that has prevailed on both iOS and OS X for the last several years in favor of flatter, more angular design elements influenced by Apple SVP of Industrial Design Jony Ive. The most front-facing part of the OS, the home screen, now has app icons that lack the dimension and gloss effect of previous versions. Design elements within the icon, like the musical note on the Music app icon, appear as a flat design flush with the background rather than a cutout like before. iOS 7 isn’t doing away completely with dimensionality, as some text elements shown in the intro video still feature embossing, and Ive emphasized that the OS focuses on “depth and vitality.” The look of several key apps in iOS 7. Many of the skeuomorphic touches are also gone from the OS, such as the textured paper in the iBooks app and the leather-bound elements in the Calendar app. Of the Game Center redesign, Apple SVP of Software Engineering Craig Federighi stated, “we just ran out of green felt.” Read 14 remaining paragraphs | Comments

British Spies To Be Allowed To Break Speed Limit

In the Details: Making a Smart Ring That Women Would Actually...