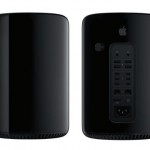 It’s been brewing for a while, and now Apple has finally redesigned its flagship cheese grater pro desktop . The 2013-era Mac Pro has been totally redesigned with a new, cylindrical chassis and vastly upgraded internals that have been designed to last for “(another) 10 years.” At the center of the new Mac Pro is a 12-core, 256-bit Intel Xeon E5 processor with 1,866MHz DDR3 RAM capable of 60GB/s data transmission. Following the trend of the MacBooks, the new power tower uses PCIe-based flash storage, and so pro users will be relying upon four USB 3.0 and six Lightning 2.0 ports (that can take up to 6 devices per port with 20Gbps throughput) for expandability. Fortunately, for those of you who intend on placing the hardware beneath your desk, the expansion ports light up to help you find your connections in the gloom. Other connections include HDMI-out 1.4, dual gigabit Ethernet jacks, WiFi 802.11ac, Bluetooth 4.0 and the usual pair of 3.5mm audio in and out ports. This machine is also the first Mac that’ll ship with dual AMD FirePro GPUs as standard, which’ll support 4K displays. Of course, the most striking change is in the design, which occupies 1/8th the volume of the current Mac Pro and stands 9.9-inches tall and 6.6-inches wide. The chance is thanks to a new thermal core, a triangular air duct that runs through the center of the hardware — with one huge fan mounted at the top. Presumably, this new model has also been tweaked to conform to new regulations concerning electrical shielding, meaning that the hardware can finally return to European shores when it arrives later in the year — at a (probably high) price that’s still to be decided. Gallery: WWDC 2013: Mac Pro Update: You can now check out our eyes-on of the new machine here ! Follow our liveblog for all of the latest news from WWDC 2013. Filed under: Desktops , Apple Comments Source: Apple

HP to Apple: Hey, we already make PCs in the U.S.