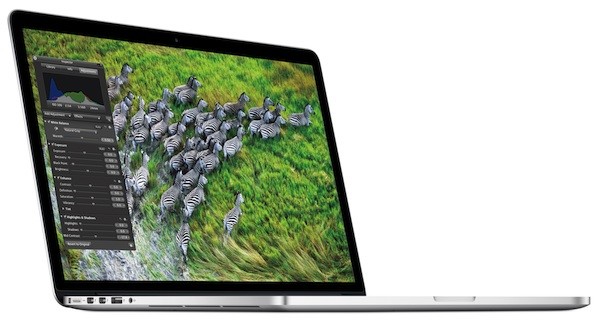 Apple announced some new MacBook Airs and MacBook Pros early in its WWDC keynote today, but it had another surprise in store for its big hardware announcement: the next-generation MacBook Pro. It packs a Retina display with a 2880 x 1800 resolution (or 220ppi), and a casing that measures just 0.71-inch thin and weighs 4.46 pounds. In addition to that high resolution, Apple is also promising higher contrast ratios, better viewing angles and reduced glare compared to other laptop displays, and it’s updated all of its stock apps to take advantage of those extra pixels, not to mention Aperture and Final Cut Pro — “reading your mail is like reading fine print,” according to Apple’s Phil Schiller. As for the other specs, you’ll get up to 16GB of RAM, NVIDIA Kepler GT 650M graphics, up to a quad-core 2.7GHz Core i7 processor, a maximum 768GB of storage (SSD, naturally), and a promised seven hours of battery life with 30 days standby. One spec nowhere to be seen: an optical drive.

Also on the outs are Ethernet and FireWire 800 ports, which you’ll now need an optional Thunderbolt adapter to use, but you do now get two USB 3.0 ports in addition to a pair of Thunderbolt inputs (plus one HDMI). Making its debut on the laptop is a new, thinner MagSafe 2 connector, as well as a new fan that’s said to be “nearly imperceptible” to the user. Pricing starts at $2,199 for a 2.3GHz unit with 8GB of RAM and 256GB of storage, and it’s shipping today. Just how big a deal is it for Apple? “It’s without doubt the very best computer that we’ve ever built,” says Schiller.

Update: Check out our hands-on look at the laptop right here.

For more coverage of WWDC 2012, please visit our event hub.