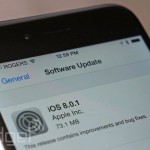 Sure, Apple’s already fixed that buggy iOS 8.0.1 update that disconnected devices from their networks and just pretty much broke iPhones for a while. It’s even been a month since then, but you still can’t let it go until you get an explanation, huh? Well, friends, this is probably the closest thing you’ll ever get: apparently, there was nothing wrong with the update itself, and it was Apple’s distribution methods or how the update was “wrapped” that broke devices. At Recode’s Code/Mobile conference earlier, Apple product marketing executive Greg “Joz” Joswiak said the issue resulted from “the way the software was being sent over servers, ” though he didn’t go into specifics. He also defended his company, claiming that mistakes are inevitable when you’re pushing software and that Apple always tries to fix them quickly. Since Joz dismissed questions on whether he thinks the company has bigger quality control issues, you’ll just have to speculate about that on your own. Filed under: Cellphones , Tablets , Mobile , Apple Comments Source: Recode