redletterdave (2493036) notes that Taiwan Semiconductor Manufacturing Co. (TSMC) has shipped its first batch of microprocessors to Apple as the iPhone maker looks to diversify its overseas suppliers. Apple will continue to rely on Samsung for its microprocessors, but as the rivalry between Apple and Samsung heats up in the mobile and soon wearable arenas, the deal with TSMC allows Apple to be less reliant on Samsung and therefore have more leverage with respect to price negotiations for future chips, as TSMC has supplanted Samsung Electronics as Apple’s chief chipmaker for iPhones and iPads. Since 2011, Apple has been striking deals with other display and chip makers around Asia to reduce its dependence on Samsung. As a result of this slowdown in sales, Samsung on Monday announced operating income for its fiscal second quarter had sunk to a two-year low, blaming ‘weak’ sales of low- and medium-end smartphones, strong competition and subpar demand. It may not be a household name like Intel or AMD, but TSMC is the world’s biggest chip maker by revenue. Read more of this story at Slashdot.

View post:
Apple Gets Its First Batch of iPhone Chips From TSMC 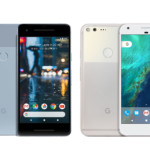 The Google Pixel 2 vs. the original Pixel: What’s changed?