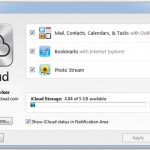 While the release of iOS 7 was yesterday’s big news, Apple also dropped a number of other smaller, but no less important , software updates. Not content with allowing only Internet Explorer users import their iCloud bookmarks to Windows PCs, the company is now letting Chrome and Firefox join the party. The additional functionality comes by way of an update to Apple’s iCloud Control Panel for Windows, a small app designed to keep contacts, calendars and bookmarks up-to-date between iOS devices, Mac and PC. To make it possible, Apple — which isn’t known for dedicating resources to rival platforms — submitted two browser extensions to do the heavy lifting. Ironically, Mac users are excluded from the fun, putting Windows users in the enviable position of receiving a feature before anyone else. Filed under: Software , Apple , Microsoft , Google Comments Via: Apple Insider , The Verge Source: iCloud Control Panel , iCloud Bookmarks (Chrome Web Store) , iCloud Bookmarks (Firefox Add-ons)