Continue Reading:
Apple pledges $1 billion to support manufacturing jobs in the US 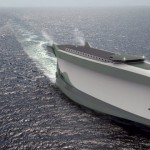 This Massive Cargo Ship Will Harness the Wind With Its Hull