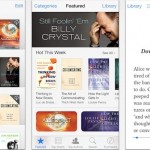 Apple may not have had all of its own apps overhauled in time for iOS 7’s launch, but it’s slowly but surely bringing them up to speed. The latest to get a complete redesign are iBooks and iTunes U, which expectedly now look a fair bit like Apple’s Newsstand app and the App Store itself. What’s more, the company’s also pushed out the latest minor update to iOS 7, which now stands at 7.0.4 — it promises a fix to the FaceTime issue that has been plaguing some users, along with the usual range of other “bug fixes and improvements.” Not to be left out, iPod touch users unable to upgrade to iOS 7 can also download an update to iOS 6 that promises to remedy the same FaceTime problem. Filed under: Cellphones , Tablets , Mobile , Apple Comments Source: 9 to 5 Mac (1) , (2)

Read the original:
Apple pushes out iOS 7.0.4 update alongside redesigned iBooks and iTunes U apps