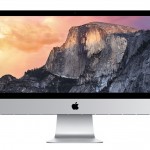 A stable of new iPads wasn’t all Apple had up its sleeve today . The folks in Cupertino have also been hard at work on a desktop update, and the iMac is the beneficiary. If you’ll recall, Apple quietly trotted out a more affordable version of the machine back in June, but this fall’s release packs a much bigger punch. With the latest model, the company’s all-in-one option gets a boost in the screen department with the addition of a Retina panel. That 27-inch oxide TFT display is what Apple’s calling “Retina 5K, ” touting a 5, 120 x 2, 880 resolution with 67 percent more pixels than 4K. The added real estate means that you’ll be able to do things like edit 4K video in Final Cut Pro X while still having plenty of room for all the tools you’ll need. Even with all of that new screen power, the new iMac is said to be 30 percent more energy efficient. The outer edge is also 5mm thick, keeping the trim frame all the way around. As far as the internals go, there’s an quad-core 3.5GHz Intel Core i5 processor that can be upgraded to a 4GHz i7. There’s AMD Radeon R9 M290X graphics by default, 8GB RAM, 1TB Fusion Drive and Thunderbolt 2 ports that offer 20 Gbps transfers. For those who need more power, the new desktops can be equipped with your choice of up to 32GB of RAM, AMD Radeon R9 M295X graphics, a 3TB Fusion Drive and 1TB of PCIe flash storage. And of course, it’ll come with OS X Yosemite. The best part? You can hand over your funds for the iMac with Retina display starting today, and the base model is priced at $2, 499. If you’re not convinced that you need to splurge for that newfangled display tech, the existing 27-inch option is now $1, 799 and the 21.5-inch is $1, 099. Filed under: Desktops , Apple Comments Source: http://www.apple.com/imac-with-retina/ 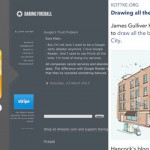 Feed Wrangler: A Great iOS Reader Replacement for a Price